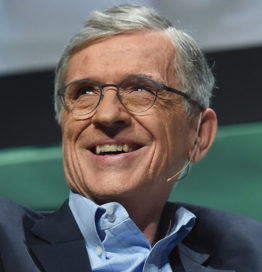 Tom Wheeler is a businessman and an author, and he was Chairman of the Federal Communications Commission (FCC) from 2013 to 2017. Presently, he is a visiting fellow at the Brookings Institution and a senior fellow at the Harvard Kennedy School.

For over four decades, Wheeler has been involved with new telecommunications networks and services. At the FCC, he led the efforts that resulted in the adoption of Net Neutrality, privacy protections for consumers, and increased cybersecurity, among other policies. As an entrepreneur, he started or helped start multiple companies offering innovative cable, wireless and video communications services. He is the only person to be selected to both the Cable Television Hall of Fame and the Wireless Hall of Fame, a fact President Obama joked made him “the Bo Jackson of telecom.”

Mr. Wheeler’s newest book is From Gutenberg to Google: The History of Our Future. He is also the author of Take Command: Leadership Lessons from the Civil War, and Mr. Lincoln’s T-Mails: The Untold Story of How Abraham Lincoln Used the Telegraph to Win the Civil War.